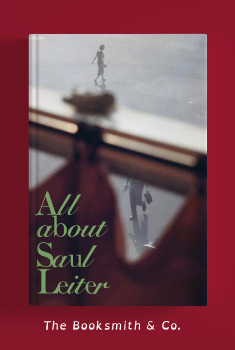 “All about Saul Leiter” is an art and photography book that exhibits the iconic photographer and painter Saul Leiter's collection of original work from 1940 onwards including his early street photographs, images for advertising, nudes, and paintings.
This special edition showcased Saul’s talents which helped him create universal art that could reach across international boundaries. I got to see a sense of closeness to Japanese art which Saul greatly admired and followed his whole artistic life; The perspectives and compositions reminiscing Ukiyo-e (Japanese woodblocks), Wabi-sabi (traditional aesthetic centering the acceptance of transience and imperfection) and Mono no aware (the beauty of being aware of things just the way it is). These magical and poetic components turned all Saul’s crafts into iconic pieces of art.
Saul’s unique style shines through in every page, reflecting his inspirations from the combination of Japonism and French influences. All of Saul’s 200 original works that are exhibited in this book highlighted...
Pictures of police walking in the snow, steamed window, passing reflections, the typographical poetry of street signs and lettering stenciled on shop windows all add up to an intimate portrait of a time, a place and its passing people. Ultimately he wanted to showcase that the mundane world around him seem luminously beautiful.
The collections of pictures are accompanied by quotations which are worth pondering on and they truly reflected his exceptional worldview. The last few chapters of the book also gave me a pass into his secret world. I got to learn about his life, his inspiration, and his surrounding that shaped him to become the great artist that he was. There was also a short comparison between Saul and Robert Frank’s so-called “The Americans” work which was quite interesting to read.
After looking through more than 232 illustrations collected during his career, it is evident that Saul Leiter celebrated the world most beautifully by having the most fun in his own secluded but happy way. I would recommend this soulful book to anyone interested in photography and pure expression.
Reviewed by Sarika Froemert @ The Booksmith